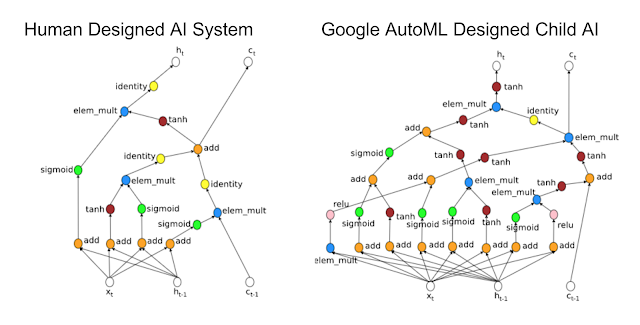 As the stock market is still having a bitter taste of a tech sector sell off last week, a piece of tech news from Google has quietly gone into my mail box and gave me a boost in confident in the tech sector. Google announced that their AutoML (Automated Machine Learning) project started in May 2017 has now created an "AI Child" that can identify images better than human designed AI model. Google's researcher called this particular AI system NASNet. It was created to solve a task of recognising objects such as people, airplane, kites and so forth in a real-time video. The image above comparing human designed model and AutoML designed model. It seems that the AutoML's result is more complex and "sophisticated" on a high level glance on the size of the neural network nodes.

In fact, according to Google, NASNet outperformed all other computer vision systems with 82.7 percent accuracy at predicting images on ImageNet's image classification data set validation. ImageNet image classification is one the most respected large-scale academic data sets in computer vision.  For those who are technically savvy, you can read about the blog post from Google Research Blog 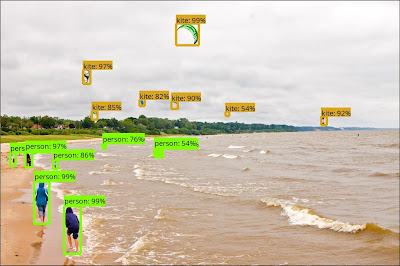 Image robots or self-driving cars that have improved real time vision. That will make them so much more efficient and safe to operate. The case of NASNet is, obviously, just one instant out of a much larger mega trend. The implications for this automatic AI system development is important in long run for value investing. It means that the speed of the AI system development will increase and benefiting many companies who can master these kind of technologies. Due to this increase in AI development speed, we are going to more and more traditional industries going away quicker than we expected. Google has made the result of this NASNet an open source so that means that a lot of people and companies will be joining the use of such technologies. The shift of power from sectors to sectors will only accelerate from this point on.

While the technologies of Automated Machine Learning can be controversial in many miss-used application harming our society, I do believe that the benefits will out weight the harms. I also have faith that we human are not so stupid that will monitor the development of these kind of technologies. It's always our incredible ability to organise in large scale (now in global scale) and the use of technologies that drove the amazing development of the human kind. As far as long term investment concern, tech sector has always have a primary position in my portfolio.