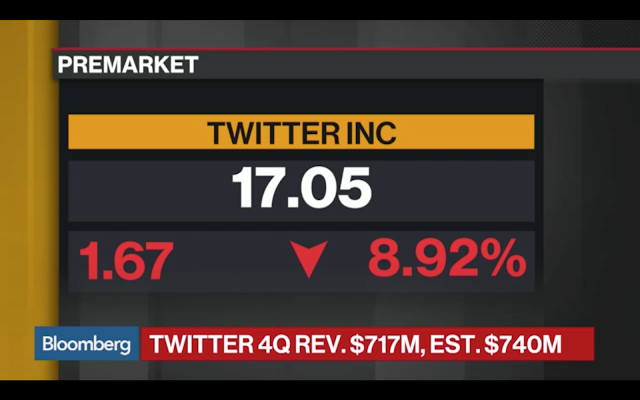 Shares of Twitter (NYSE:TWTR) have now lost more than $3 a share after the company's Q4 report. While the social media name again reported a non-GAAP bottom line beat, revenues widely missed expectations. The company was not able to take advantage of many big Q4 2016 events, putting into question the company's future. The handle #disaster certainly would be appropriate right now.
Source: Seeking Alpha

It's common sense that most of us are ordinary people who like to share information in a private mode. That is you want to share news and contents with your friends, the people you know and is connected, only! Most people careless about sharing news to public. However, ordinary people will share their silly dinner pictures to their private friends and family network; and I believe these casual contents are major contents running on Facebook up until today even that Facebook is getting more like a news distribution network. So for the majority of the people who has nothing to say and shout to the world will use Facebook as a "Private Media Platform".

On the other hand, Facebook is not just a private media platform but also a public one too with features like Facebook Group & Facebook Page and being able to choose if you want to make your post shared to public or not. So that makes Facebook both a Private and Public Media Platform and the ability to catch all. I have written about this on my earlier post 3 Types of Social Media Network For Your Social Media Strategies despite that I did not write the post for evaluating the growth of Facebook and Twitter.

So that makes Facebook platform for ALL USERS. So by design Facebook can grow as much as the human population as long as they execute your plan probably.

I am not sure if this is real but it certainly looks like that Twitter is either really avoiding investing cost to host more length data or got stuck, design wise and conceptually, in the old mobile phone SMS "Short Messaging System" format with limited resources and display space for larger media format.

Twitter is Twitter. By the time Twitter change all those things I have mentioned, it becomes a Facebook Clone!  From an investor relationship perspective it's not good strategy to tell the world that they will be a copy cat. However, business wise, I still think Twitter should still do it because, as long as you want to grow beyond your niche segment, these are the things they need to do to appeal to the mass segment. After all, they do have a huge user base and this user base and there is only one mass social media network, Facebook, and the world can use an alternative.