Showing posts from June, 2009
Show all

Pastel Painting to relax for tonight. 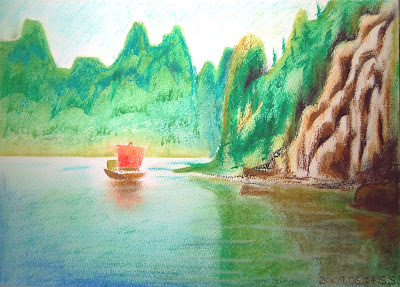 After a few days of rushing and running, I feel very tire. This is the kind of time where one can do some silly thing just to relax. Tonight I have chosen to do some silly painting. I wanted to expriment with oil pastels to see if I can simulate the affect of oil painting. Pastel is not meant for great details. Light color paint cannot cover another layer of darker color so it's not easy to add details such as lighting effect. It's really difficult to do so. I have also made a wrong choice of color tone for the mountains far in the background. Should have picked a blue / grey tone to enhance the feeling of distance for better layering affect. To simulate the great details such as the rocky edge of the mountain, I either have a super plan from from the start or I need a much bigger piece of paper. This painting is only a big bigger than A4 size. Not too successful but I am satisfied. It's really my second pastel painting in my life. Tonight will be a good night for slee
Read more

Painting with my daughter.

I have always like doodling as a kid. I have tried sketching a bit as a teenager. In my 20s’, every once in a while I couldn’t sleep and did not find anything meaningful to do so I did a few doodling again to have fun. But I was never a “professional” artist. In fact, statistically, before age of 40 I may have produced 0.25 piece of painting per year. I have always fancy being an artist but I always have other things to do. I have enjoyed drawing but it was quite a “waste of time” for me until my daughter came 7.5 years ago. When she started to ask me to draw with her, the meaning of drawing became so much different. There were emotions attached to each piece of drawing as I had to carry the role model to help my daughter to draw. Funny thing is that, often, my daughter went away to play with other things and I was left to do drawing on my own. I think my daughter is just an excuse for me to start drawing. Anyway, this is one of my drawing a few years ago. It’s no
Read more

The number one advice to win a job you have no experience what-so-ever!

June 12, 2009
I was in a seminar a few months ago sharing interview tips with a group of mature, not so competitive job seekers. Many of them were out of a job. Their skill sets that helped them to keep a job were no longer highly demanded in the job market. They needed to secure a job that they did not know if they are qualified or not. When they knew that I had changed industry and roles several times in my career, many of them asked what made my previous employer hired me when I was new and often did not possess the relevant experience and qualification. There were so many reasons I could think of but I wanted to say one point where it will apply to everybody. After a moment, I gave them the following point: I was bold. To say it more eloquently, I was confident about myself and took the initiative to take on the challenge. To say it more frankly, I wanted it bad enough that, like a naughty kid, I was willing to do whatever I could to secure the toy. Let’s put it this way, if you want to secu
Read more

4 Must-do to land a job in a tough time!

June 10, 2009
Time is tough these days if you are out of a job. My job is a manager for a job portal in Hong Kong. I have seen our web site’s job searching traffic and online job application skyrocketing as the Hong Kong’s Heng Seng Index plummeted starting at the end of 2007. Many job seekers asked me for advice to how to find jobs. There are many good advices to locate the jobs but what’s more important is that the job seeker must be internally ready for a tougher and leaner job environment. More people will be fighting for the rare jobs in the market. Landing a job means a tougher selection process. Landing a job means that you are more competitive and ready! How to be competitive and ready many job seekers asked? In a nutshell, you have to find yourself some meaningful and demonstrable projects to do which you will be able to leverage them to maintain and even improve your state of readiness. Yes it’s quite obvious. There is no quick fix except for the “presentation” part. Be More Knowle
Read more

6 reasons why Google Wave is likely to be successful.

June 10, 2009
Last week I was introducing Google Wave in an executive lunch to someone with an IT and Business Consultant background. He did not know of Google Wave until I introduced to him over the lunch (read my last blog post if you don't know Google Wave : Click Here ). After listening to me for a few minutes, he suddenly said that Google would not be successful in launching Google Wave. His immediate and raw reaction actually reinforces my post’s title "the most ambitious communication product by Google”. It is indeed ambitious. The chance of success for such a comprehensive product to be launched to the mass market is low; thus the description “ambitious” was craved into my blog post title. I am more positive becuase Google Wave fits the 6 characters that I have observed in the last decade from web applications that have made it big (at least once). I call them 6 Es. More will be covered in this post later. I am slightly more positive in this case, also, because I believe the ge
Read more
More posts